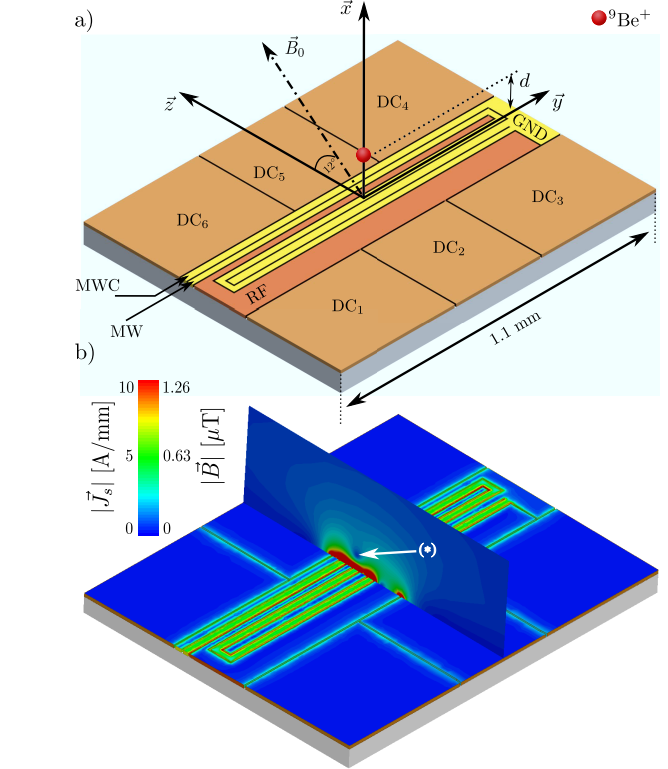 The objectives of MicroQC are to demonstrate fast and fault-tolerant microwave single- and two-qubit gates in ion microtraps and to design scalable support technologies that apply these techniques in a multi-qubit multi-register quantum processor. Trapped ions have proven to be a promising platform for quantum information processing for which high fidelity gates and scalability concepts have been developed. The paradigm of trapped-ion quantum information processing is to manipulate trapped ions (cooled to their motional ground state) using lasers. A powerful alternative approach was introduced in 2001 by Christof Wunderlich (PI of USIEGEN), who proposed to combine hyperfine states of the electronic ground state, microwaves and inhomogeneous magnetic fields to construct entangling gates. In the last decade, USIEGEN, followed by UOS, demonstrated the capabilities of microwave quantum logic by using ion traps with static magnetic-field gradients. Quantum gates using this method have been realized by USIEGEN with 171Yb+ ions. The gate fidelity was limited by the use of bare atomic states that are susceptible to magnetic-field fluctuations. Recently, USIEGEN, in collaboration with the theory group HUJI, followed by UOS, have extended the qubit coherence lifetime by over three orders by using dressed states, that are highly resilient to magnetic-field fluctuations. Subsequently, UOS demonstrated microwave sideband cooling to the motional ground state and a microwave two-qubit quantum gate with 98.5% fidelity.

In 2008 Christian Ospelkaus (PI of LUH, then guest researcher at NIST, Boulder, CO, USA) proposed the alternative oscillating magnetic gradient scheme for microwave quantum logic. Since then three groups have embraced this approach: the NIST group, the Oxford group of David Lucas and the newly established group of C. Ospelkaus at Hannover (LUH). A first demonstration experiment for an entangling two-qubit gate with oscillating magnetic gradient was realized in 2011, demonstrating the tremendous technological simplification of the method.

Microwave control can simplify the construction of large-scale quantum information processors by using the well-developed and compact microwave technology already present in mobile phones and many other devices. When combined with the formidable challenge of implementation of a scalable quantum processor, this technology can be the key enabling step by condensing the effort from an optical table with several square meters of accurately aligned optical components (as with laser control) down to a tailored conductor structure embedded into the chip surface and off-the-shelve microwave components. Furthermore, the required quantum control can be embedded into a scalable microfabricated structure, which is a must for large-scale devices. Members of MicroQC have recently published the construction plan of how one can build a large scale quantum computer using this technology.